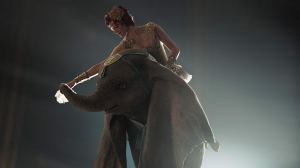 When I was a little girl I was enamored by Dumbo. My mother loved this movie, and became a sobbing mess at the Baby Mine scene every single time she watched the VHS.

I too loved it, at first, because she loved it. I love it now for my own reasons, and admittedly I also tear up during the traumatizing melody. I know why this song pin-pricks my heart, and find myself wishing I knew why exactly that it affected hers so much…

She was not a mother, by nature.

She would love the animals, true. Anyone who knows her would say that immediately… However, she wouldn’t take care of them at all, really only coddle them for her own emotional fulfillment. That job wouldn’t do. No, I imagine her (though if I could ask her, she would disagree) as something between showgirl and clown. Clown Showgirl? Would that even be a thing? She would be the ever committed guys-girl, ensuing laughter with one outlandishly ridiculous performance after another. Once the night lights were dim, however, she would cast herself as a real guys-girl in other ways… Among the circus family she would be both the most loved and hated woman around.

I know this is all true.

At first I struggled to see myself…

Dirty, neglected child of a performer? Hiding with the animals, where I made friends and found solace? I imagine a childhood of days passing without seeing my mother, and seeing more her flashes of anger and belittling than the joy inducing woman seen by others, in the ring.

I know all of this is true, as well. Strip away the tent, the spotlights and the tigers and I can honestly say I have lived this childhood. A version of it, anyway.

I cannot think of Dumbo and circus life, imagining what role (within the circus) I might play, without considering my mother. It is an emotional DNA impossibility. That being said, one day the little girl would be a grown woman. She would stay with the circus long after her mother was gone because, in ways her mother never did, the girl valued family, even when family did not value her. She would care for the animals and love them as deeply as she could love anyone. She might fall madly in love with a behind the scenes designer and life would be hard, because- well, it is life- but also, circus life is hard, and this life was all she had ever known.

As time passed, she would give of herself, enabling other performers to be their very best. She would dive in and make herself needed, focussing on her ability to create, design and grow the gifts that this show could give to their audience. She would, eyes twinkling, find her most soul filling moments were when she secretly watched the children drink in the magic of human ability, animal and wonder unfolding before them.

Probably this girl would pass away in her sleep one day, an old woman, eternally unappreciated and alone. I’d like to think that it wouldn’t matter though, because she would carry the happiness she helped others find, and that she’d found joy in this too…

(Something nags at me that this post went too dark and too deep, considering it’s about a children’s movie. If you know Dumbo, and the story, it is a deep and often dark telling of so many hard to digest topics. Just like all escapes, we see only what we choose to. It is in the acceptance of the darkest parts that we find the ability to truly love ourselves completely, which is what we’re longing for others to do anyway, isn’t it?)

My birthday is on Thursday, and I will be front and center at the first local showing of Dumbo. I know it will be amazing and I cannot wait. This gift Disney has given to me, (let a girl pretend a little) is the perfect way to usher in a new life year.

Did you ever dream of joining the Circus?

What would you have done?

Are you anticipating this movie too? Here’s the trailer to hold our excitement for a few more days!

From Disney and visionary director Tim Burton, “Dumbo” expands on the beloved classic story where differences are celebrated, family is cherished and dreams take flight.   Circus owner Max Medici (Danny DeVito) enlists former star Holt Farrier (Colin Farrell) and his children Milly (Nico Parker) and Joe (Finley Hobbins) to care for a newborn elephant whose oversized ears make him a laughingstock in an already struggling circus. But when they discover that Dumbo can fly, the circus makes an incredible comeback, attracting persuasive entrepreneur V.A. Vandevere (Michael Keaton), who recruits the peculiar pachyderm for his newest, larger-than-life entertainment venture, Dreamland. Dumbo soars to new heights alongside a charming and spectacular aerial artist, Colette Marchant (Eva Green), until Holt learns that beneath its shiny veneer, Dreamland is full of dark secrets.  “Dumbo” soars into theaters on March 29.