Yesterday I was talking with someone I recently met about my youngest daughter being fourteen, and me at fourteen.

It really messes with my head.

My daughter is adopted, and didn’t come to us with the best of beginnings. Of course this affects her life in ways that make some things a bit more difficult than they are for the average fourteen year old girl. Now that part I can relate to. I have said it here before, but my readership has changed a bit so I will put it out there again… When I was twelve, I was sent to live in an ultra conservative Christian group home, a few states away from my home. I craved a normal adolescence. What i ached for was normal. {Of course, what I did not understand was that “normal” wasn’t something I would ever have because my beginning had been traumatic and altering, and shaping. Anyway, all of that is a story for a much different post.} So, in that regard, I can relate to Gen and I see a lot of similarities in us. I am also able to be empathetic and understanding to those feelings in a way that no one really cared to before me, over the silly things like the notion of a high school experience, and boys.

Fourteen was a magical age for me. Perhaps the most romantic that I had. It was, what memory serves, the age before life got really hard. It was the age before heart breaks of love, harsh young adult realities and the death of childhood dreams…

For years I have watched movies, or read books within the Coming of Age genre, and often the characters are around fourteen. It would strike me how different their fourteens looked to mine, but never did I really grasp how inappropriate mine may have been- until I was the mom of a fourteen year old girl… 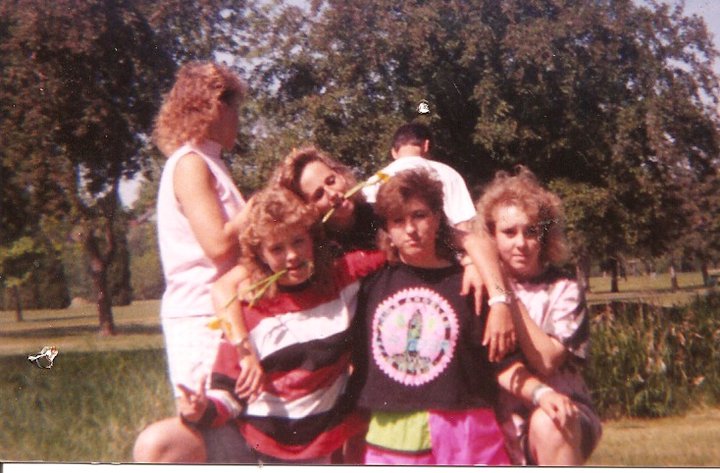 That’s me, on the far right in my amazing pink and black tie died shirt. AWESOME. I was barely 14 and the year was 1990.

My favorite movie was still Dirty Dancing because I’d only seen very selectively conservatively appropriate films for the past two years so I clung to that one.

My favorite band was Depeche Mode. How that got approved, is beyond me. At the time I was certain that Personal Jesus was a tune highlighting the importance of religion of some sort, still rebellious enough but not quite the booty call anthem for melancholic pre-emo depressants that it actually was. Apparently my houseparents also naively assumed the best. (Though by the time I had turned 17, they had changed their tune dramatically and even most Christian music was inappropriate.)

I loved writing depressing poetry, laying out in the sun (STUPID!) and photography. On my little neon yellow 110 camera- I was an artist.

In the afternoons we sometimes chilled out in front of the TV watching Little House. This would continue through most of my group home years. (until my house parents decided Little House was inappropriate and I would then watch it at my friend’s house, as if it were some crazy soap I couldn’t miss- Even though we’d seen them all, already.)

My best friend was a girl named Dandy. This is us a few months after that picture…

I apparently loved big bangs. Who am I kidding, we all did.

Still in pink and black (though I do not remember this shirt at all) and wearing a bullet, on a chain, around my neck. I’ll get to that…

Between the last photo, in May, and this one, in October, interesting developments had taken place.

I was in love.

I was *head over heals for a boy named Mike Hemsath. We talked of things like marriage and running away together. We made out extensively, everywhere we could, ever chance we had, for as long as we could manage as such things were significantly frowned upon at conservative Christian group homes.

Mike evoked that can’t wait to get out of bed in the morning and motivate me through absolutely anything so I can see him again spirit in me. I was literally the girl next door. (group home. only four houses. Even with forbidden relationships- and all were- it was bound to happen.) He was the perfect boy friend. He loved to talk, though whenever we had the chance to talk we usually did other things with our mouths… He loved to write me long notes and letters. He made me mix tapes- the kind where he talked between the tracks recorded live from the radio- of course meaning he invested serious amounts of time in them.

By the end of our relationship I had seven tapes (two were just him talking to me about how much he loved me and what he would do for me, and what his life goals were, which included me.), a shoe box full of notes, his Mike Hemsath scented denim jacket and every ounce of faith and trust in him and our future together. He was leaving the group home. On his “goodbye”, he begged me for the only photo of us (because we were FORBIDDEN to be together), and I relented because I loved him and knew we were forever. He gave me a bracelet that meant we would marry one day and there would never be any other girl for him. He left his best friend William with instructions to watch over me, protect me and begged us not to fall in love. This was the week before Christmas*.

We officially broke up just before I was fifteen. He seldom called or wrote. He had a real life on the outside and it was bound to happen, though it hurt like hell and broke my little girl heart into a million shattered pieces. (We were loosely in touch for a few years, but it was uncomfortable. I’d love to hear how he is now. It’s funny, he’s the only boyfriend I think my husband has ever worried about me being friends with. I am friends with pretty much all my others. There is something about Mike that worries him, which is funny to me because looking back- none of that was really love. It was lust and transferred life hurt and desperation (on my part) for love and acceptance.

I look at my fourteen year old and I can’t imagine her going through a day of that right now. The highs and the lows were too intense for a girl that age and likely why I handled them so inappropriately.

*the bullet. I was a witch. Well, not really. I wanted to be a witch. I was a wanna be witch. I did some really bad, stupid things. Scary things. That bullet was all a part of that. A friend and I did it together. it was a dark time.

*That Christmas morning I was going to kill myself. I won’t go into the details but a sweet little boy literally saved my life.

I guess everyone’s coming of age tale is unique to them. They can’t all be sunset kisses on Grandpa’s farm with the neighbor boy. Here’s to a gentler one for my girl all the same…

One thought on “In the spirit of Taylor Swift… 14…”