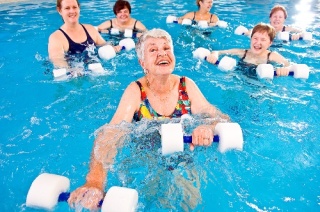 i have written before about my unique high school career. it’s safe to say though, that i didn’t really “get” the social pyramid structure until college.
It was overwhelming, at best.
In the days since college, I have been in various settings where I either fell at the top of the system, at the dung heap bottom of the system or, in a few rare instances, managed to climb my way towards the top.
It’s funny, really, how these things work…
That being said, I had signed up to take a class. It’s a fitness class. In the water. I signed up long before I knew Genny wouldn’t have a successful transition in the art school. I had all but decided to give up on the class when it occurred to me to simply take her along.
You know, because i need something for me.
So, last week we started “our” class.
Twenty-ish people in the luxuriously warm hydro pool. Of our group of twenty-ish, two were under sixty.
If you guessed my twelve year old and I- you are correct.
As you can imagine, the class somewhat caters to the elderly. It kinda should, I guess, since it’s an arthritis class. Whatever.
Fine. I have arthritis. There. I’ve said it.
It settled into my right hip before i had reached the age of 10, due to a disorder. i struggled with my right knee, as a result. When I was 16 though, and my adorable little sister of 13 pushed me off a ski lift- my knee was trashed and eventually the arthritis love spread to it too. In the 19 years that have followed, it has managed to affect the ankle too. As if i weren’t already the luckiest girl in the world- about six years ago I broke a section of my right foot at a water park and guess what speculatively has arthritis now too??? Yay me.
So, for pain management purposes, i thought this class could potential rock.
Plus, i LOVE swimming, and water- so it’s even more awesome.
Socially though, i think it will be less of an amazing experience.
The old people don’t like us.
The old people have cliques.
We don’t fit in.
The old people flirt, and banter. One old man is the definite ladies man of the bunch.
I had already formed this conclusion before the instructor announced that one of our classmates needed us to “huddle around” because she had something to share.
One of the members of the bunch died of a massive stroke on Friday.
I am fairly empathetic so I immediately had to fight back tears, despite having never met him. The friends all began talking about him, and how fun he was, and how much they’d miss him. They referred to him as the life of the party.
It was around this time of the very moving share time, which I viewed from the outskirts- when one sweet little lady piped up and said “What? Dave is really dead? It’s his birthday today. Facebook told me and I just facebooked him a message telling him happy birthday! I can’t believe it.”
To which someone else said, “Oh, is it. I didn’t make it to facebook this morning.”
A few moments of silence passed and one man spoke up, “I’ve been meaning to tag him in those photos from Lucy’s birthday party. I’ll do that today.”
More stories of Dave were passed around and then someone mentioned maybe they should “hang out” after lunch.
Pretty much, those whole experience left my jaw perpetually hanging open…
Facebook. Hanging. Cliques. Parties. Flirting.
How awesome with elderlyhood be????

2 thoughts on “On growing old…”