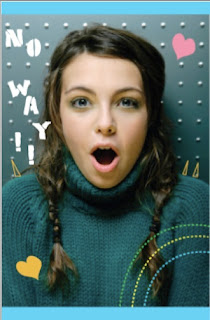 Having a tween girl is pretty much like being on one of those truly horrifying, sometimes comical scary amusement rides. There are things that she does which remind me so fondly of school girl crushes, the vitality of flavored lip gloss, and those carefree friendship moments. At other times though, moments are down right frightening. I distinctly remember the day that I realized little boys weren’t looking at Genny as their tomboy playmate as much as actually looking at her. The first time that a boy, several years her senior, struck up a flirty conversation with her we were at the public pool. While her physical development is a bit ahead of her age, I got the impression that as long as she gave him attention he didn’t care that she was only eleven. Of course, i broke up their dialogue very quickly, only to be frustrated with her complete oblivion to the details of his interest. What if I hadn’t been there?

In fact, I’ve started dreaming of these things… Bad dreams…
And then I wake up and she’s sweet and childlike, in her cozy pajamas and I feel complete relief.
Most mornings…
Some mornings, her pajamas are less juvenile and her curves are evident. She may be reaching for a bottle of syrup to lather her pancakes in, or something else normally simple- but I notice her and I cringe.

According to my husband, over the past few months I have conveyed to him that growing up is so tough for girls. And though I stand by my words, I’m starting to wonder if it isn’t just a little big harder on us moms… While it’s tough for them, it’s at least a little bit magical too… But us, we know what lies ahead…

Last year, Gen developed a crush (one of many current loves, I assure you) on a boy we see quite often. They are friends, which is sometimes a help and other times a hindrance. At this point, they know each other fairly well. He has done stupid, middle school, boy things which annoyed her- though her affections never wavered. And then, then he committed the ultimate crime: He told Genny that Justin Beiber was gay.

Of course, pretty much every boy in this age range has uttered these same words, to get to a girl. This boys motives were no different. The odd thing was that Genny’s forgiveness did not come.
And it did not come…
And, at a point when we began to wonder how much this pop icon could honestly mean to her that, weeks later, she is still intensely bitter against- the playing field changed.

It changed in the form of my good friend’s son, who is in high school, and who also holds a highly esteemed position within Genny’s affections. High School boy told Genny, as she was pleading her case, that he too thought Justin Beiber was gay. The atmosphere froze as adults within earshot moved not at all, for fear of the natural disaster which could come next.

But nothing happened. She didn’t bat an eye. She accepted that High School boy could think that and even later reasoned, to me, that it’s likely that boys everywhere were merely jealous of all of the success and attention that JB receives.

And then it happened…
The very thing she had not even realized before that moment- that she was angry at, and hurt by, middle school boy because he likes her very good friend.

I knew we were entering uncharted mother/daughter territory. How do I instill in her, at 11, how not to be obsessive and jealous. How do I encourage self esteem and self confidence? The pressure set in and I knew I was in trouble…

Then she shared with me, tearfully and wrought with as much emotion as her sweet little face could possibly contain, that she knew he liked said friend, because he shared mnm’s with her on Valentines day.

Why wouldn’t he want to share with me? (ignoring the fact that she hates mnm’s…)

And all of this comes about a week after I overheard her telling said friend that she has fat thighs.

Oh man, I am not ready for this… Am i the only tween mom who feels like everything I say or do is just going to mess it up?

8 thoughts on “They just wanna…”