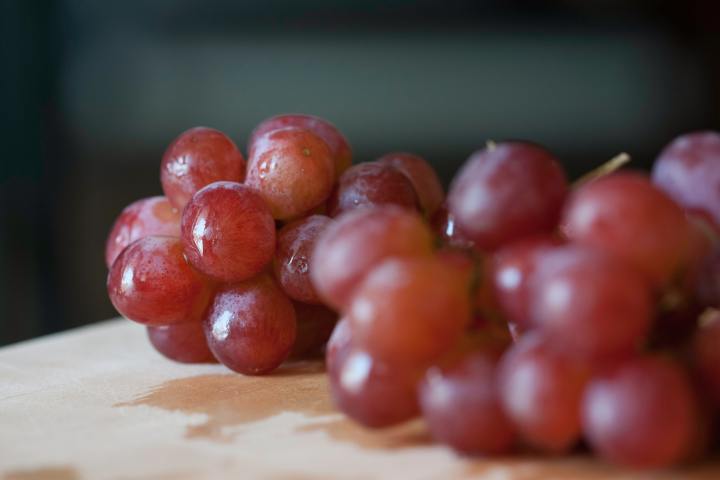 Monica Gellar’s parents aren’t known for esteeming her life choices. In one episode, when Monica is beginning to (finally) feel like her mom may have some faith in her, after all, when her mom reminds her that they expect failure from her.

She charmingly refers to it as pulling a Monica.

It basically means: screwing up.

Mistakes and struggles Monica may have known were seen as dismissive and typical, by her family. These were the antics they expected of her…

Ever the faithful friend and advocate, one of Monica’s best friends Phoebe declares that from this moment on, “pulling a Monica” would mean successful and good things.

I LOVE seedless red grapes! In fact, one of my favorite meals is a bowl of these gems of antioxidant goodness paired with cubed chunks of cheese. So good!

Additionally, red grapes are my favorite side dish, a preferred late night snack and far more tasty than any packaged chocolate bar.

One evening I was having a “working dinner.” My husband was away, on a business trip and I had a looming press deadline. My rumbling stomach had led me to grab this delectable go-to grape & cheese dinner and retreat to my office.

There I sat, alternatingly plopping grapes and cheese into my mouth as I typed away. I was so in the zone that it took a couple of chews to realize my mouth was harboring a slimy, possibly fuzzy and altogether revoltingly mushy grape.

I’m not going to lie- I totally threw up.

I couldn’t eat anything else, that evening, and possibly well into the next day. Whenever I would remember that heinous atrocity, my stomach would send out tremors to shake throughout my entire body.

For awhile, the sight of grapes made me cringe, but eventually my love of them one out and I’m proud to say that I am once again a grape eater, though I am much more thorough about checking and washing them…

One bad grape did not ruin them for me. While I will likely never forget the horror of that one, it was only one.

Instead, I learned to alter my own behavior regarding the fresh fruit I eat.

At some point, for some odd reason (possibly, maybe tied to the show Will & Grace?) the basic, middle aged, difficult, American-white-woman became known as a “Karen.” It probably began as some social media moment of ranted-sarcasm that caused viral laughter, thus a trend was born.

I’ve encountered many, many women who would fit into this label, especially when working retail. This sort of delightful peach goes back much farther than the birth of the Karen meme.

They are so frustrating, I KNOW. To be honest though, I’ve never encountered one named Karen.

Last week our 63 year old neighbor saw us walking our golden retriever Elenor. She adores Elenor and was so excited, as she began crossing the street towards us. And then, instantly she was face first, on the ground, in the middle of the road. This woman, who cared more about making sure her friends were safe, not sad, not hungry or going without anything during the pandemic. This kind woman who lives alone and has devoted her life to taking in senior rescue dogs that have come from horrific neglect and abuses. She nurtures them, loves them and insures the rest of their days are spent somewhere safe where bowls are full, beds are plush and loving kindness is plenty. When they pass on, she grieves them because they were her heart, and then she opens her door again.

This beautiful heart gets up from her grieving losses, from her face-first street falls, and she smiles and showers love on Elenor anyway. She leaves special gifts on our doorstep and puts such a light into our quiet neighborhood.

This beautiful soul of a neighbor is Karen.

Through a chain of events, about a year ago, I was lucky enough to be connected with a lovely Canadian woman as she was enduring the death of her mother.

Her soul, cavernous and longing for the woman who gave her life, poured her own raw grief out into poetic and aching words filled with so much love. Love for the woman she’d lost, but also love for those of us hurting, who read her words. Such genuine transparence etched itself into the grieving hearts of these readers.

This woman, who I am now so incredibly lucky to call friend, has taught me so much about grace, love, authenticity, faith and a hundred-thousand-trillion other vital things.

While my own name is merely a weather condition, envied by none, this beautiful soul’s name means PURE, and this is one hundred percent accurate because she absolutely is.

In my 44 years, on this earth, I have known many Karens, and every single one of them have left marks of humanity and heart on the people lucky enough to know them.

Perhaps you don’t know Karens like the ones I’ve known… Think of the kindest and most worthy woman you’ve known. Perhaps a grandmother, or the sweet neighbor who always baked your favorite cookies and taught you to watercolor. Whoever this spirit is- give her a moment of space and honor in your mind… There is so much power and peace when we take a moment to reflect, honoring women who have shaped us in good ways, isn’t there?

Now, imagine the heroin’s name is an insult.

For being pure, raw, tender and honest women who love, and do it well, their very identity is a joke.

Everytime we call some awful, mean white woman a “karen”, we tarnish the names of women who are nothing like her. Women who are anything but basic. Everytime we use their name, we HURT them. We HURT their children and the people who love them. Doesn’t it kind of seem like that might be uglier behavior than the ridiculous way the “Karen” in question behaved? Who is the jerk now? We are.

When I was younger, if we were venting about the mean customer at the counter, we simply referred to her as a bitch. Feminism has shown us that if we want men to respect us and stop minimizing women into little labels of cruelty, then we need to set the example and not do things like calling other women derogatory names either.

I’ve got to say though, if we are incapable of not labelling women like this something that conveys exactly how terrible they are, in that one word, then isn’t the vulgarity a kinder option? Isn’t it kinder to say the words “I had a customer today who was such a bitch, and here’s what she did…” rather than victimizing innocent women, their legacies and reputations because of one difficult woman’s selfishness.

Maybe it’s just me though… One day I hope there’s a world where we don’t need to exploit the behavior of someone for laughs and likes and sensationalism. One day I hope people resort to kindness and don’t inspire that reaction. This isn’t the world we live in, and so I simply have to ask if we can get some perspective when it comes to the actual Karens of the world…

The actual blondes, who aren’t ditzy.

The Black women who are beautiful and brilliant and inspiring.

The single moms who work hard and are not lazy or easy.

Can we just decide today, right now, to intentionally see people and stop this lazy minimization? Can we agree that one bad piece of fruit is incapable of destroying the whole orchard?