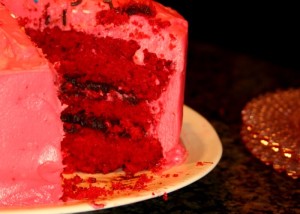 I wanted to elaborate a little, on that cake that I made this past weekend…

If you’ve looked at the recipe, then I’m sure you noticed that it calls for rosewater. I omitted that. It isn’t that i wasn’t up to scouring eclectic markets in search of it- as much as KMS wouldn’t care if there was an expensive additive in it or not.
The frosting turned out pinker than I’d expected. {In my defense, after dumping in SO MUCH food coloring, for the batter, the bit I used in the frosting did seem really minuscule…} What was fun though, was that I took a little portion of the cake, that I’d trimmed off, and I mixed it into the icing just after the food coloring had spread through. THEN I took an extra dollop of Cream cheese and did the same thing. If you look super close you will realize that the frosting has red and white specks woven in. It was actually the coolest thing. It didn’t alter the cake flavor, at all, and it was a super easy something that I could do to make it semi cool… (unlike my ULTRA COOL cake artist friend.)
Over all, it was delicious. Being the non-baker that I am- I probably would have abandoned the recipe early on as I was suddenly overwhelmed by the time commitment and amount of dishes accruing on my countertop- IF I hadn’t been making this cake for one of the kids. Anyone else, eh… a Cup cake from the local bakery store would have been sufficient.
For me, it was a pretty intense cake recipe and it took a long time. For some of you bakers, I’m sure it’s a piece of cake. ha. that wasn’t even intentional…
So- about the cake…
– if you are a baker and you like cake, make this one.
– it’s delicious.
– it’s beautiful.
– stick with the white icing. Unless you are making it for a ten year old girl, that is.
I probably won’t make it again, but mostly because I look upon baking the way many look upon a tedious chore check list. Once I’ve made the recipe, it’s crossed off and I move on.

2 thoughts on “Confessions of a non-baker…”