ok. Not literally. Not entirely anyway…

Saturday was awesome on many, many levels.
First, with anything that requires intricate planning, one has to expect (or, in my case- lose sleep at night) that it won’t go flawlessly and the entire ordeal will be ruined. I am happy to report, however, that it did go flawlessly. In fact, it went so perfectly that they (most of them anyway) actually believed it!

There are lots of pictures. So much to tell.

I had a few people asking how I did it so cheaply, and a few others asking if they could resource what we did. So, I decided to address those two issues first.

For invitations I bought packages or mini notebooks, scrapped the front and used the pages inside as a coded message. Cost: $4.00 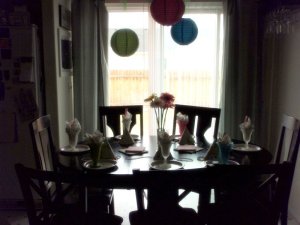 We had seven girls, including Genny. I made a list of everything I wanted, and then “trimmed the fat”. For example, I wanted layers of colored tulle streaming from my light fixture. I wanted strings of fake pearls and flowers adorning the fixture and dangling from it. It would have looked beautiful, and cost about $40 to pull of. It was important to me, at first. In the end, we had 3 paper lanterns hanging by green tulle. (Cost $3.30)
And really, the fraction of time the girls were actually at the table, (which was for dinner and later cake and ice cream), it was irrelevant how it was decorated.
Also, I opted out of helium balloons. We bought a pack of 25 balloons that the girls helped blow up while they were waiting for Gen to arrive… and the balloons strewn on the floor provided ample forums of entertainment. Far more than helium filled would have. (and a TON of money was saved. Each balloon averaged 15 cents, versus 90 cents filled with helium. that’s a difference of $18.80 cents… and it was just more fun)

I bought party plates because they said “happy birthday”. I had decided NOT to do a banner because I didn’t have time to make one and didn’t like the ones I saw for sale. The plates were my compromise (Target. $1.88 for 10) They had matching (adorable) napkins so to add a sense of decor along with practicality, We stuffed them design side out, in our sundae cups.
A note about the sundae cups: we had received four of these (the colored ones) as a gift. I love them! But we only had four, so we began scouring thrift shops where we did manage to find three more. 35 cents a piece! You can’t beat that!
(Also, because I adore my china, and all of my other service ware matches my dishes, which didn’t match the party them, I bought a plastic SWELL pink Toile design service set at the thrift store for $1.35. For Dinner and breakfast the following morning, our food was served on these.)
{$9.51 total, so far} 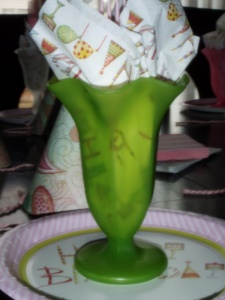 I am not a cake maker… Not at all. I have a friend who makes beautiful and wonderful cakes, but she was already making one for someone else, and she is doing our cake for our re commitment ceremony so I couldn’t ask her.
Doing a party on a minimal budget, I also had to ask myself if I wanted to focus $25 on having a gross, store made cake. What would the girls rather have?
So, again, I put my ideals aside and baked a cake. {traditional white cake, with sliced strawberries and whip cream icing between the layers, frosted in a pale pink buttercream and sprinkled with cocount. Nothing special.} Cost: $1.70… plus the candles and balloon at $3.00 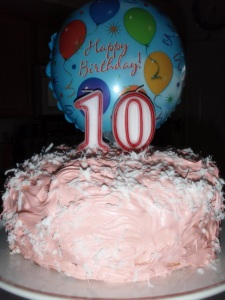 For dinner we secretly asked Gen what she wanted, (as she knew nothing about the party) and she requested grilled hot dogs. So, we went to Costco where we got her favorite fruits (strawberries, pears, plums, red grapes) and veggies (carrots and sugar snap peas), made a veggie dip and grilled up hot dogs. To drink there were her three favorite drinks (Strawberry Crush, Root Beer and Cream Soda, all served in glass bottles.) Cost: $17.50

With the cake we had ice cream sundae’s. Vanilla ice cream and toppings of chocolate, caramel and strawberry, with whipped cream and cherries to top. Cost: $6 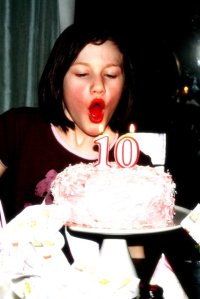 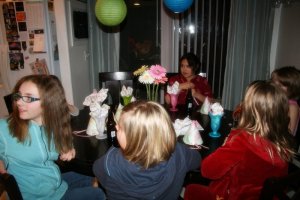 Aside from gas on our scavenger hunt- the only that that cost any money was our buying the girls coins at the local arcade and that was $25. 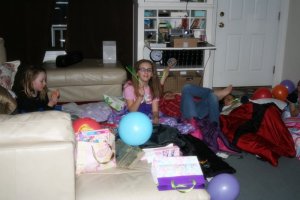 After the mystery the girls munched on snacks they brought, layed in the living room and watching classic and new nancy drew movies projected on to the ceiling. For breakfast the pancake maker extraordinaire made a gazillian pancakes which they decorated with butters and peanut butters, sliced fruits, fruit syrups and lots of whipped cream. (we used leftover fruit and whipped cream so the total cost of this breakfast was only $1.80)

After pancakes and while waiting for parents, Balloon Wars happened beneath the sky of Camp Rock… 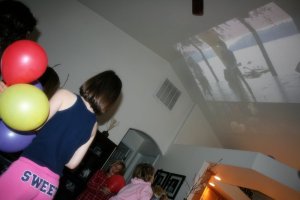 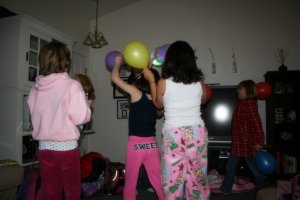 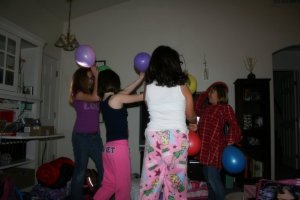 For Party favors we had to stray from our original plan. We ended up making little tic tac toe game boards out of scrabble tiles, Nancy Drew images and wooden boards.

We put them in these bags, filled with candy. The bags came from the $1 spot at Michaels. Totalling $7 for 6 girls.

TOTAL COST: $74.51
CHW’S Face at all of the girly drama that ensued: PRICELESS…
His Quote of the weekend: “I so need guy time!”

After dinner, and envelope arrived for Genny, with this letter in it: 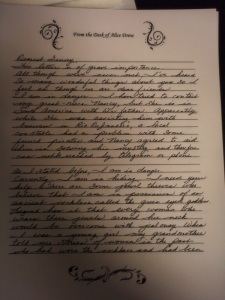 The letter was from Alice Drew, Nancy’s aunt. She was in grave danger. There were jewel theives after her and she was in hiding. They believed she was in possesion of an ancient necklace called The Green Eyed Goddess. She had, in fact, once had the necklace. Due to the jealous it’s presence invoked, her family (generations ago) had been forced to protect it. When she realized, however, that she was aging and would be forced to pass this burden on to Nancy- she knew she couldn’t. Too many people had depended on Nancy… So, she found this “underground” museum in Paris that secretly housed millions of priceless artifacts. Last december she donated it to them, however the theives refused to believe she didn’t have it.

The theives had threatened her if she got the police involved, so she needed Genny to go to her house and find the reciept, as proof, that she no longer had the necklace. Then, the police could take that reciept and use it to divert the theives. It is all very Law & Order like, and complicated. The point of it was that Alice couldn’t just give Genny her address. What if the theives got the letter before Genny did? So she set up various clues and secret rendevouz throughout the city, ultimately leading to her dark and scary home.

(Many thanks to the Pojo’s Manager for playing along!)

The girls LOVED it, but there were MANY tears, many proclaimations of fear and my daughter shouting about now “hating mysteries” and vowing to “never read Nancy Drew again!” she was so scared…

And to think, we thought the girls would just think it was lame…

13 thoughts on “How I made my daughter, and six of her friends, fear for their lives…”